CuriosityStream is an online media platform that hosts thousands of documentaries and educational programs. They provide video-on-demand streaming services, focusing exclusively on non-fiction content with a large variety of topics, from space exploration to history to lifestyle. The service was launched by Discovery Channel founder John S. Hendricks in March of 2015, and has since grown to feature over 3,000 original and licensed titles.

Audience:
There is no specific audience intended to use CuriosityStream, rather it caters toward any active learner – regardless of age. The content provided by CuriosityStream is sure to pique the interest of anyone interested in the wide range of topics covered by the thousands of documentaries and non-fiction programs available on-demand. Though there is a slight focus on the sciences, there is content for everyone – including content catered to kids.

Content:
The major categories available on CuriosityStream include: Science, History, Technology, Nature, Society, Lifestyle, and (made for) Kids. Each of these categories have multiple sub-categories that can be picked from at your leisure through the dropdown menu on the topbar of the site. CuriosityStream hosts original series and documentaries in addition to previously released content – meaning there is exclusive content which can only be found if you subscribe to their services. One original series, which caught my attention, was “The History of Home” – a documentary exploring the past, present, and future of houses/homes – narrated by Nick Offerman of “Parks and Recreation” fame.

CuriosityStream’s homepage shows the service’s newest additions, as well as content recommended for you. Following those are “Staff Picks” – hand selected by the staff behind CuriosityStream. If users wish to search for specific content or topics, then a search bar is also available at the top of the page.

Favorite Courses:
I thoroughly enjoyed and recommend “The History of Homes,” narrated by Nick Offerman. It provides a lot of depth and information on a topic which most people often do not stop to think about – our homes! It’s a three episode series, each episode about 1 hour long. Hundreds of other users have watched and reviewed the series, giving it an overall 95% rating. Another short original series was “The Power of Sound,” a 13 minute watch detailing and exploring the massive impact sound has on survival and life on Earth, largely focusing on animals in the wild, and their usage of sound to stay safe and communicate with each other. 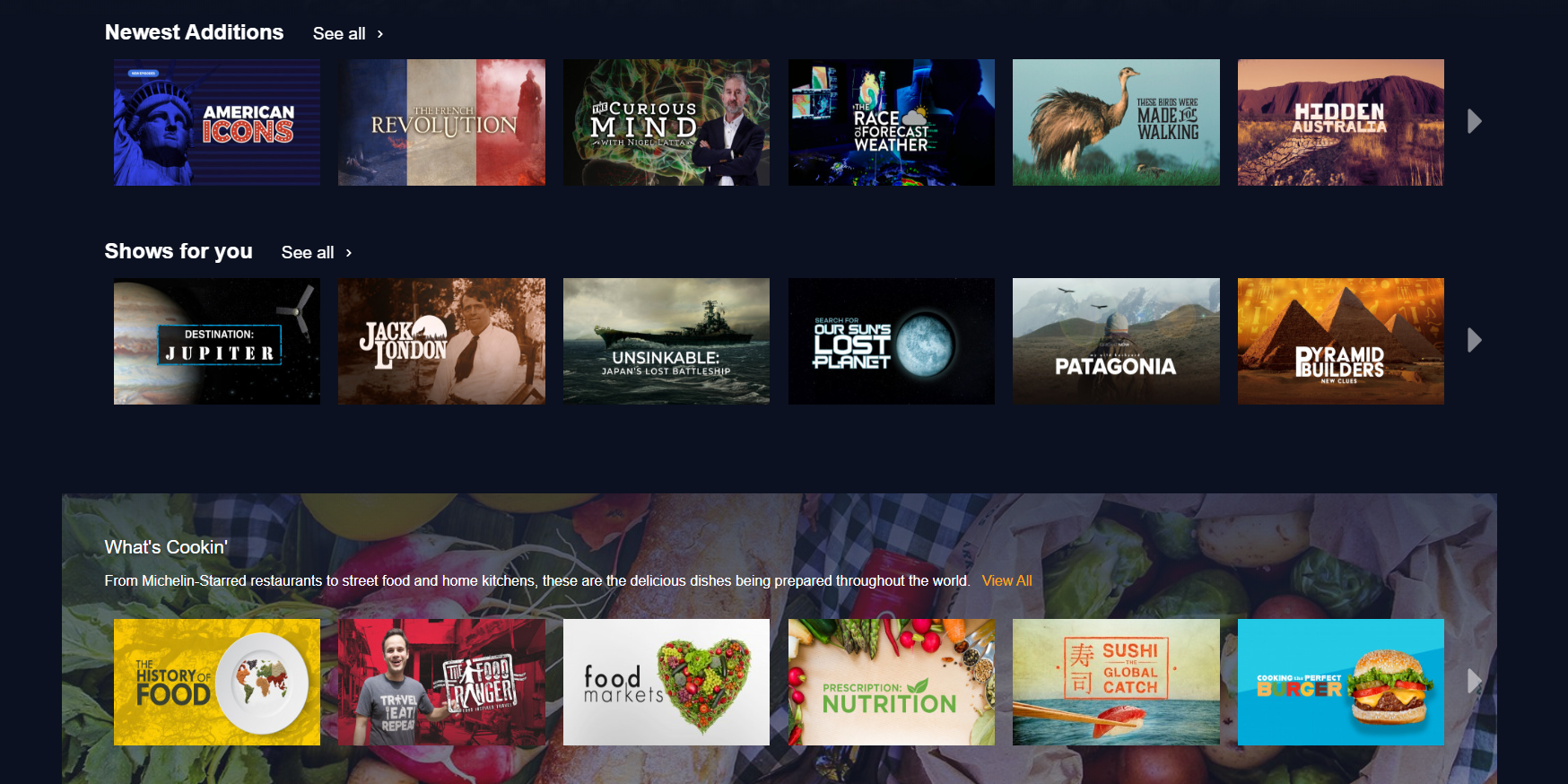 CuriosityStream has a very simple design – a top bar with four options, and a standard streaming service display of recommended videos. The four top bar options include: Browse (with a dropdown menu displaying the various categories and sub-categories), Collections, which brings users to a page with various handpicked content suggestions, a Search bar, and the User tab (a dropdown menu displaying Watchlist, Continue Watching, History, and account settings). 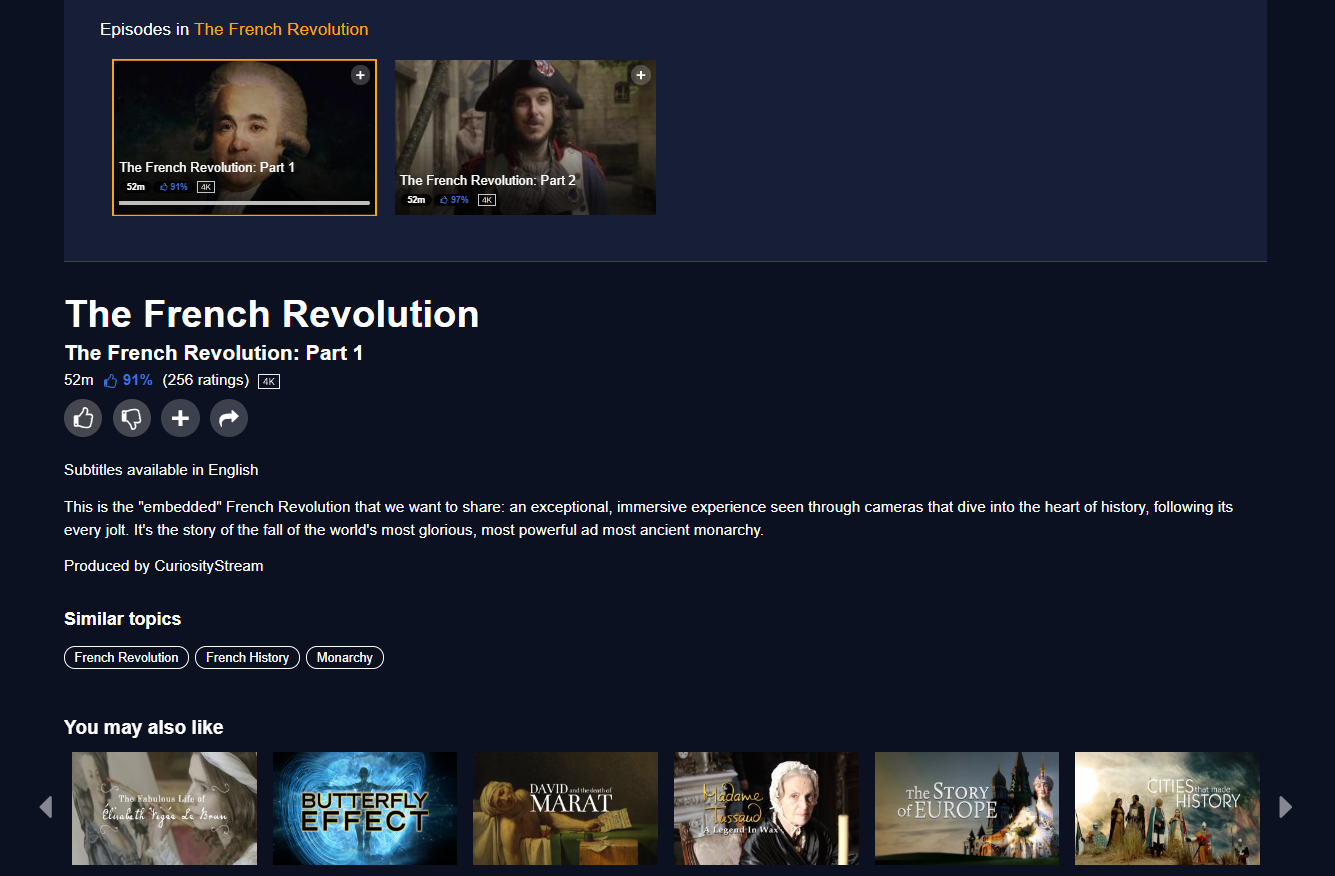 Videos can be watched at .5x, .75x, 1x, 1.25x, 1.5x, 1.75x, and 2x speeds. Most videos have English subtitles as a standard option, and some videos/series even have non-English audio tracks, though English is set as the default. Video length is displayed right under the title, as well as number of ratings and overall rating percentage. Underneath the number of ratings, there is an option to upvote or downvote the video, add to watch later, or share the video via Facebook, Twitter, or Email. A brief description of the video/series is located under the upvote/downvote and sharing options. There is also a list of Similar Topics displayed, which allows users to see other videos with similar ideas/overlapping ideas (such as animals, locations, or overarching categories.) There is also a section labeled “You may also like” which shows video recommendations based on what users have previously watched. At the bottom of the page, users can create conversation threads or see other users’ comments and thoughts about the video.

CuriosityStream is currently available to be streamed on devices such as Apple TV, Amazon Fire TV, iOS/Android phones and tablets, gaming consoles such as the XBox One, and Smart TVs, giving a wide range of viewing options for users. CuriosityStream also has referral prizes if users refer friends to the service. Parents can also set an option to show only kid-friendly content, so they can leave their kids exploring safe and educational content without worry.

Comparison:
CuriosityStream specializes in non-fiction documentaries and programs, so the best comparison would likely be to the documentaries available on other major streaming platforms such as Netflix. The original content is quite high-quality, in my opinion, and the previously licensed content is fairly well-curated. There is content from companies such as BBC, which allows CuriosityStream to provide a variety of high-quality content.

Areas of Improvement:
It would be nice to have trailers for some of the longer documentaries/programs. Rather than a short, written description, I think it would be useful to see and hear a small clip or snippets of the documentary prior to diving into a full forty-five minute long documentary. There is no download feature, so if that were added, it could be useful for people who wish to view their content while travelling or when internet connection is spotty.

Conclusion:
Overall, CuriosityStream is very well-priced and has a lot of very interesting content. The original content is very high quality, so if only for that, I would recommend at least trying the free trial for 7 days to see if there is more programming that interests you before committing to a subscription. In addition, if users have Amazon Prime, they can add CuriosityStream onto their Amazon Prime plan for simplicity’s sake – lessening worries about dealing with a large number of subscription plans. Overall, a very solid subscription plan for a very solid service. Whether you have 20 minutes or 2 hours, CuriosityStream has something for you to watch!