Getting To Work On Labor

“Think well before selecting your leader, and when you have selected him, follow him. But in case you find his policy detrimental to your interests, kick him out.” — Muhammad Ali Jinnah

“When you see how the President makes political or policy decisions, you see who he is. The essence of the Presidency is decision-making.” — Bob Woodward

Biden Getting To Work On Labor 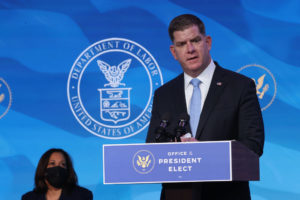 Incoming President Joe Biden is appointing strong leaders to head up federal agencies that need revitalization and redirection after four years of Trumpian mishigas. His nominee for labor secretary is Marty Walsh, current mayor of Boston. Walsh is a long-time labor leader who not only should welcome increased spending on infrastructure projects like upgrading roads and bridges to strengthen the economy and create good-paying jobs, but also help advance Biden’s promises to support the expansion of unions.

A top labor department official in the Obama administration said OSHA under Biden should get far tougher in holding employers accountable for failing to take steps to minimize infections. “Clearly priority one is an emergency standard for OSHA dealing with Covid and equally a focused, full-on press on inspections, enforcement, and guidance. It means doing everything OSHA hasn’t been doing,” he said.

Biden has repeatedly called for a $15 per hour minimum wage and for guaranteeing workers 12 weeks of paid family and medical leave; he’s also backed sweeping legislation that would make it easier to unionize. Biden’s appointees to the National Labor Relations Board (NLRB) will likely reverse many Trump labor board decisions that made it harder for workers to join unions.

Even with Democrats narrowly controlling both houses of Congress, passing legislation to expand the minimum wage, family leave, and more won’t be a cakewalk as long as it takes 60 votes to overcome a Senate filibuster. “It’s going to be a slog to undo all the damage that’s been done the past four years by the Trump majority on the board,” said a former NLRB chair. “They’ve overruled precedents that went back decades.”

Will The Kyrgyz Stan Authoritarianism? 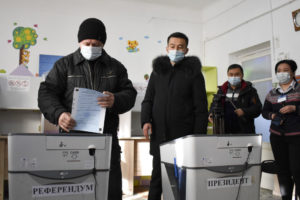 In Summation: Court Protects Asylum, Foundation Of An Immigration Nation