We hope everyone had a fantastic holiday season. We did as we caught up on family time, sleep, and running (some people’s form of relaxing). Daily Pnut’s Tim even broke a personal record on a local hill he always runs during the holidays – I’m also at ease with the knowledge that I will likely no longer be able to run faster than that time as I age.

We hope everyone has a fantastic 2020 and wish everyone well this next decade (as a listener of NPR we learned that “People Can’t Even Agree On When The Decade Ends.”).

Time is something that I couldn’t help but endlessly think about this holiday season. This growing obsession with time probably has much to do with the aging of my parents and my kids. I want to have flow and be lost in time but I’m also scared when time seemingly disappears as I want more of it. And I can’t seem to answer one of life’s most important questions: am I properly prioritizing my time (and attention)?

As someone who collects quotes, I know and have used Daniel Kahneman’s quote: “Nothing in life is as important as you think it is, while you are thinking about it.” (That quote if anything creates stress because one begins to think whether one’s current thoughts are important or should one instead attend to another idea?) I can’t help but think that 2020 will indeed be a really important year: USA elections, the rise of China, the nationalization of the internet, global warming, and whether a quote by Isaac Asimov bears true: “The saddest aspect of life right now is that science [and technology] gathers knowledge faster than society gathers wisdom.”

“Do not go gentle into that good night,

Old age should burn and rave at close of day;

Rage, rage against the dying of the light.”

(A famous quote used in Interstellar. Right now Australia unfortunately seems to be in Interstellar conditions. We saw the movie about six years ago but it only feels like that was a few weeks ago.)

“So we beat on, boats against the current, borne back ceaselessly into the past.” 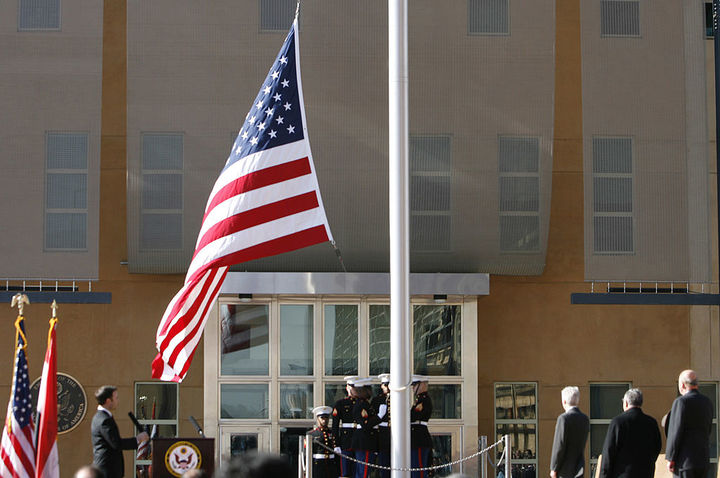 There and Back Again

No festive celebration marked the end of 2019 at the US Embassy in Baghdad. Instead diplomats were hunkered down inside as hoards of pro-Iranian protesters swarmed outside chanting “Death to America!” Some protesters forced their way inside the embassy and several outbuildings were set on fire.

On Wednesday American forces used tear gas to dispel the crowds and end a siege that could have been an explosive crisis for the Trump administration. The two-day standoff evoked memories of earlier attacks on American embassies in Tehran and Benghazi, Libya.

The conflict began six days ago with a rocket attack on an Iraqi military base that killed an American contractor and wounded several Iraqi and US servicemen. US officials blamed Kataib Hezbollah, an Iraqi militia with close ties to Iran. On Sunday American forces retaliated with airstrikes on five sites controlled by the militia in Syria and Iraq, killing at least two dozen people and wounding twice that many. Iraqi officials denounced the US airstrikes, calling it a violation of Iraqi sovereignty.

Iraqi authorities had previously contained anti-American demonstrations, but on Tuesday thousands of protesters were allowed to march on the compound unimpeded. President Trump tweeted that Iran “will be held fully responsible for lives lost, or damage incurred, at any of our facilities.” For good measure he added: “They will pay a very BIG PRICE!” Wednesday Iran’s supreme leader Ayatollah Ali Khamenei responded with a taunting tweet: “You can’t do anything.”

Sometimes You Just Gotta Stop And Smell The Justice

A Few Good and Bad Men & What’s The Difference Between Navy Seals and Instagram Influencers?