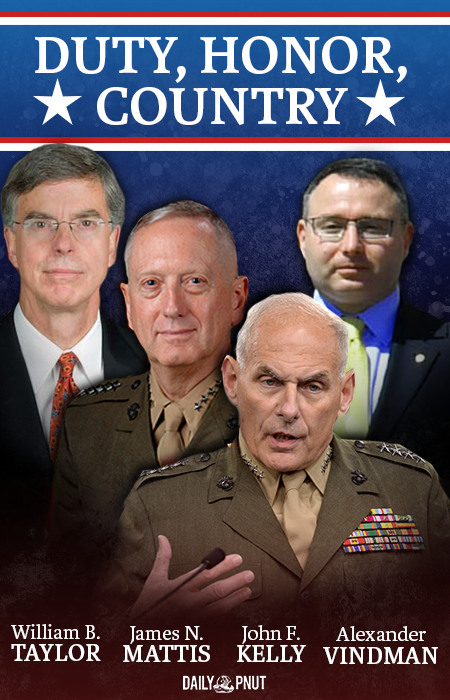 Ukraine, You Saw, You Testified

The first witness to have direct knowledge of the July 25 phone call between President Trump and Ukrainian president Volodymyr Zelensky testified Tuesday before a House impeachment committee. Lt. Col. Alexander Vindman, a decorated Army officer and the top Ukraine expert assigned to the National Security Council, offered new details and corroborated other witnesses’ accounts of Trump’s alleged attempt at a quid pro quo when he tried to get Zelensky to investigate his political rivals in exchange for military aid and a meeting at the White House.

Vindman was in the Situation Room listening in on the call, along with other NSC officials and members of Vice President Pence’s staff. He heard the president say he wanted a “favor” after Zelensky brought up the topic of American military aid.

In prepared remarks released late Monday, Vindman said he was so “concerned by the call” he reported it to the NSC’s lead counsel. “I did not think it was proper to demand that a foreign government investigate a US citizen…I realized that if Ukraine pursued an investigation into the Bidens and Burisma it would likely be interpreted as a partisan play” which could lose Ukraine its bipartisan support.

Vindman is in a unique position because he emigrated from Ukraine with his family as a child and is fluent in Ukrainian and Russian. Ukrainian officials sought advice from him about how to deal with Rudy Giuliani, who was leading the clandestine pressure campaign on Trump’s behalf. “I am a patriot,” the colonel said, “and it is my sacred duty and honor to advance and defend our country irrespective of party or politics.”

Will Putin Trick The Brains Down In Africa

8 Hours A Day Keeps The Doctor Away

Maybe Just Be A Vampire This Year