“A good leader is always learning. The great leaders start learning young and continue until their last breath.”

“For me the starting point for everything – before strategy, tactics, theories, managing, organizing, philosophy, methodology, talent, or experience – is work ethic.” 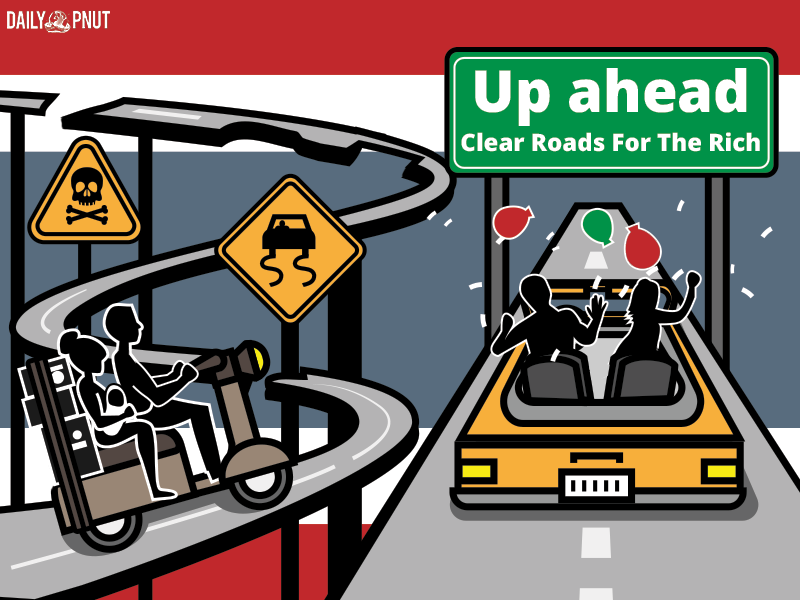 Easy Street: Next Exit On The Right

Wealth and privilege are advantageous for a number of economic reasons, but for a poor person in Thailand, lacking that means risking your life every time you travel on a road. The Southeast Asian country is one of the world’s most unequal societies, and that extends to users of roadways. Poor people are far more likely to be killed in accidents than the wealthy and well-connected.

According to a 2015 World Health Organization report, Thailand had the world’s second highest rate of road fatalities per capita; in per capita motorcycle deaths, it was number one. A 2018 WHO report concluded only 12 percent of Thailand’s traffic deaths involved occupants of cars or other light vehicles; most of those killed were motorcyclists or pedestrians.

For the superrich or those in positions of authority, the rules of the road don’t seem to apply at all. They know they can speed with impunity and drink heavily before getting behind the wheel with little fear of consequences. As a WHO specialist in unintentional injury said: “What is clear in Thailand is that the roads are not safe for all users.”

In 2015 the Thai government promised to cut traffic deaths in half. But despite 2017’s small downturn in fatalities, Thai roads still rank among the world’s 10 most dangerous, with more than 20,000 preventable deaths each year. And almost nothing has been done to address the wealth gap that’s at the core of the problem with road deaths.

He’s Got 90 Million Problems And They’re All Evidence

Survival Of The Richest