“I wanted you to see what real courage is, instead of getting the idea that courage is a man with a gun in his hand. It’s when you know you’re licked before you begin, but you begin anyway and see it through no matter what.”

“It was times like these when I thought my father, who hated guns and had never been to any wars, was the bravest man who ever lived.” 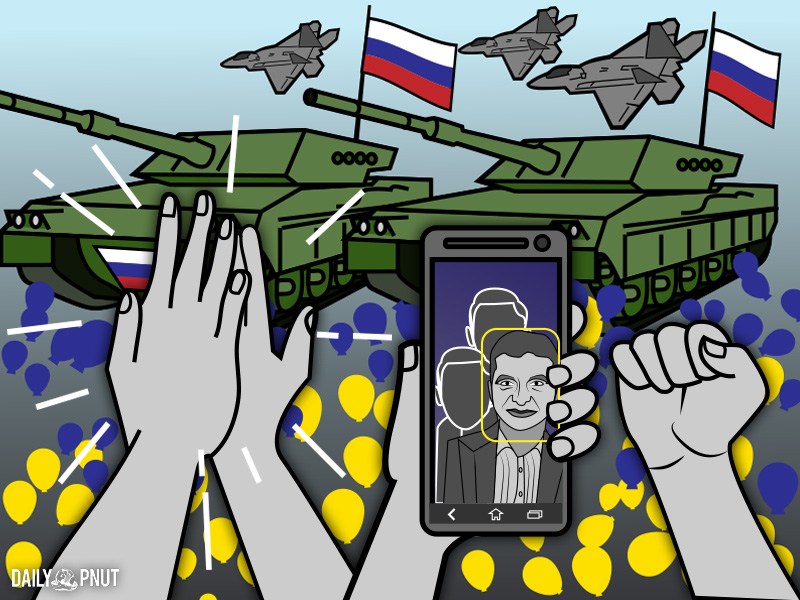 Zelenskiy Knows How To Work A Crowd: Ukraine’s new president, Volodymyr Zelenskiy, was sworn in Monday. If his inauguration day was any indication of how the former television comedian will govern for the next five years it should be interesting. The day was marked by informal moments in which the political novice high-fived cheering supporters and stopped for a selfie with the crowd. At one point he kissed a man on the forehead. Addressing parliament, Zelenskiy promised that as hard as he’d worked in the past to make Ukrainians laugh, he’d now work to keep them from crying. Then he called on officials to take down the customary portraits of the president that hang in their offices, and put up pictures of their children instead.

Later Zelenskiy walked to his new office. Then, as the current parliament was still dominated by the bloc named for Zelenskiy’s defeated opponent, Petro Poroshenko, the new president’s first official act was to dissolve the entire body and call for a snap election to take place in two months, which will give Zelenskiy’s new party a chance to win its first seats. He urged lawmakers to use interim until the election to pass laws that would strip them of immunity from prosecution and ban officials from enriching themselves. Prime Minister Volodymyr Groysman, who came to power in 2016 as part of Poroshenko’s coalition, immediately announced his resignation, saying he was stepping down to fight the upcoming snap election.

Highest on the new president’s to-do list is dealing with neighboring Russia, which forcefully annexed Ukraine’s Crimea region in 2014. Moscow backs separatists in a war in the east that so far has killed 13,000 people. Zelenskiy wants to achieve a ceasefire, but has given as a condition for a dialogue the return of Ukrainian territory and prisoners of war.

America’s Fatal Attraction to the Middle East: Shortly after a rocket landed a mile from the US embassy in Baghdad over the weekend, Trump warned Iran not to threaten the US. In a tweet on Sunday the president exclaimed: “If Iran wants to fight, that will be the official end of Iran. Never threaten the United States again!” Iran’s foreign minister, Javad Zarif, responded that economic terrorism and genocidal threats won’t ‘end Iran.’ “[Trump] hopes to achieve what Alexander, Genghis & other aggressors failed to do. Iranians have stood tall for millennia while aggressors all gone,” Zarif tweeted, adding: “#NeverThreatenAnIranian. Try respect — it works!” Prior to this exchange Trump had seemingly softened his tone on Iran, following days of heightened tension sparked by his administration’s sudden deployment of bombers and an aircraft carrier to the Persian Gulf over still unspecified threats. All these tensions are the culmination of Trump’s decision a year ago to pull the US out of Tehran’s nuclear deal with world powers. Washington and Tehran both say they do not seek war, but many worry any miscalculation at this point could spiral out of control. (Guardian)

Additional reads: “Britain tells Iran: Do not provoke the United States or Trump will retaliate.” (Reuters); and “Rocket Hits Green Zone in Baghdad as Tensions Flare Between U.S. and Iran.” (NYT, $)

I Spy With My Little Eye, No Spies: Britain’s Home Secretary Sajid Javid said Monday that the country is ushering in a new spying law and considering updating its treason legislation to counter the threat from hostile states in the wake of the nerve agent poisoning of former Russian intelligence officer Sergei Skripal and his daughter Yulia in Salisbury last year. Javid said the moves were necessary to cover gaps in existing laws and insure Britain has the powers to address threats for when it leaves the EU. Consideration is being given to using counter-terrorism powers to make it a crime for British nationals to travel to certain areas in Syria, and possibly parts of West Africa in the future. Britain’s security services have thwarted 19 major terrorist attacks in the past two years, 14 of which were of Islamist origin and five motivated by far-right extremism. (Reuters)

Spider-Man, Spider-Man, Does Whatever Will Get Him Banned: On Monday an unidentified man climbed to the top of the 1000 foot tall Eiffel Tower, clinging to the Parisian landmark for more than six hours before being taken into custody by police. An Eiffel Tower spokeswoman said: “The man entered the tower normally and started to climb once he was on the second floor.” Streets surrounding the landmark were cleared and closed to the public. The tower will reopen Tuesday. The man’s motivation for the stunt was unknown. (BBC)

They Can’t Ford This River: Ford Motor Company announced Monday it is eliminating about 10 percent of its global salaried workforce, roughly 7,000 jobs, by the end of August. Of those white collar jobs going away, some 20 percent are upper-level management. The restructuring will save the No. 2 automaker $600 million annually. Ford CEO Jim Hackett said in an email to employees: “To succeed in our competitive industry, and position Ford to win in a fast-changing future, we must reduce bureaucracy, empower managers, speed decision making, focus on the most valuable work and cut costs.” The job cuts include both voluntary buyouts and layoffs; open positions will be frozen as well. About 2,300 of the affected people are employed in the US. President Trump harshly criticized General Motors for cutting jobs. The president has pushed boosting auto sector employment, but has focused primarily on blue-collar cuts at factories rather than white-collar reductions. (Reuters)

A Mighty Midas Find: A man using a metal detector and wandering around Western Australia’s gold fields unearthed a 1.4 kg (49 oz) gold nugget worth about $100,000, according to a shop owner in Kalgoorlie. The man, who remained unidentified, was an experienced local hobbyist. The shop owner sells supplies to gold prospectors, and said the man detected the piece on some saltbush flats about 18 inches below the surface. Approximately 75 percent of the gold mined in Australia is produced in and around the Kalgoorlie region, and finds of this scale by prospectors are known to happen a few times a year. (BBC)