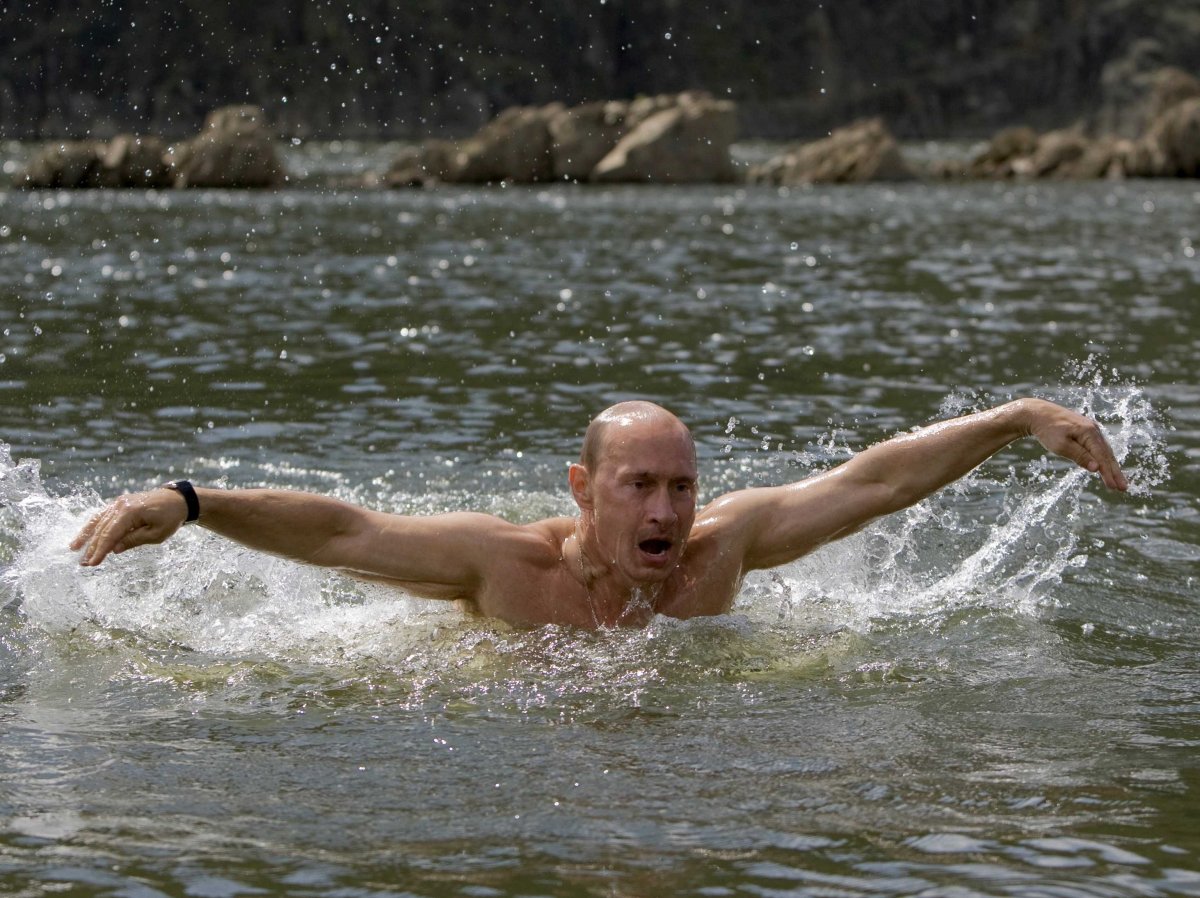 Pnut Survey: Trump In The Image Of Putin?

How does a presidential candidate’s image affect their standings in the polls? It’s a lofty question that has already catalyzed decades of analysis, so we’ll spare you the history of how televised debates gave Kennedy an advantage over Nixon. But in the internet age, persona and personal brand are integral to a campaign. We wanted to ask our readers a few questions about the upcoming US elections, and from a brief survey, we were able to see correlations between the images of foreign leaders and the images of the US presidential candidates. We teamed up with Bernett Information Group to uncover parallels between the opinions we hold for certain world leaders and the US candidates. Here’s what we found.

The United States’ relationship with Russia will be a central topic this election season. Russian President Vladimir Putin’s actions in Ukraine have put a strain on his relationship with many world powers, but given Russia’s role in the Syrian peace talks, the United States will have to navigate a diplomatic path with Russia that could have profound consequences on our alliances in the Middle East, Eastern Europe, and beyond.

So, who is most equipped to navigate that path? Will it be Hillary at the head of negotiation table? Or will it be Trump, no doubt hanging with Putin on horseback, hunting and drinking the way Donald Trump imagines foreign policy to look like?

We wanted to know what our readers thought of Donald Trump and Hillary Clinton’s divergent foreign policy platforms, and, well, their distinctly different styles. Putin’s role in American foreign policy, we’ve learned, is a litmus test for how American voters view these candidates. Those who think Trump would do a better job handling Putin are more likely to agree that Putin is a potential ally of the United States. However, those who don’t believe Putin is a trusted ally are more inclined to support Clinton, arguing that she is more capable of handling The Vlad. 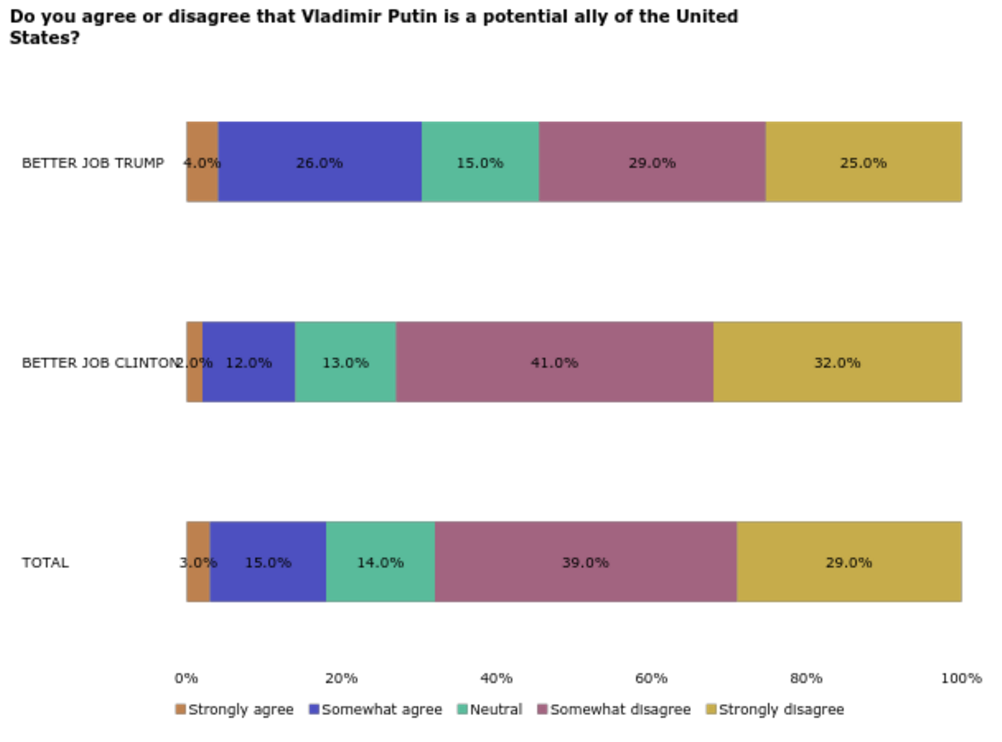 Moreover, those who would go as far as to name Putin as an adversary of the United States realize it’s going to take more than a hunting trip and some Putin-brand vodka to win him over. A strong 80% of this camp either somewhat or strongly agrees that Clinton would be a better US leader in navigating a relationship with Russia. 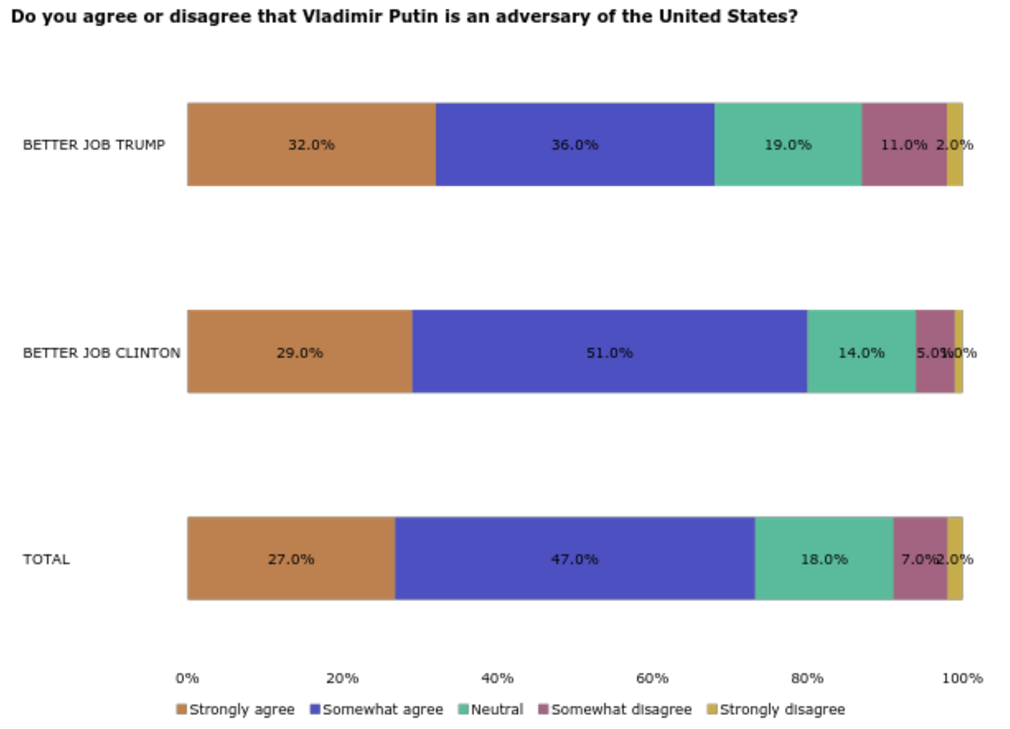 With these statistics in mind, it’s arguable that America’s feelings for the TV star directly correlate to their feelings for the TV tsar. US voters who find Vladimir Putin to be relatively harmless to the US agenda are inclined to give Trump the same benefit. Similar to Trump, Putin is often portrayed as “tough guy,” and critics will call him self-aggrandizing. Putin’s fans celebrate his machismo, many of whom would argue that he, indeed, made Russia great again. However, Trump and Putin are two very different politicians, or at least we can make that assumption based on Trump’s vague foreign policy assertions. Trump does believe he would get along with Putin, and that camaraderie is believed more so by people who find Putin to be a comrade. Despite their differences, they hold similar spaces in the American psyche of old-fashioned, masculine leadership. Our perception of one serves as a litmus test for our perception of the other.

This is just Part I of our series that will tap into our readers’ views on the US election. We’ll be sharing our insights in a monthly report. Want to take the survey? Sign up for Daily Pnut and we’ll let you know when the next poll is available.