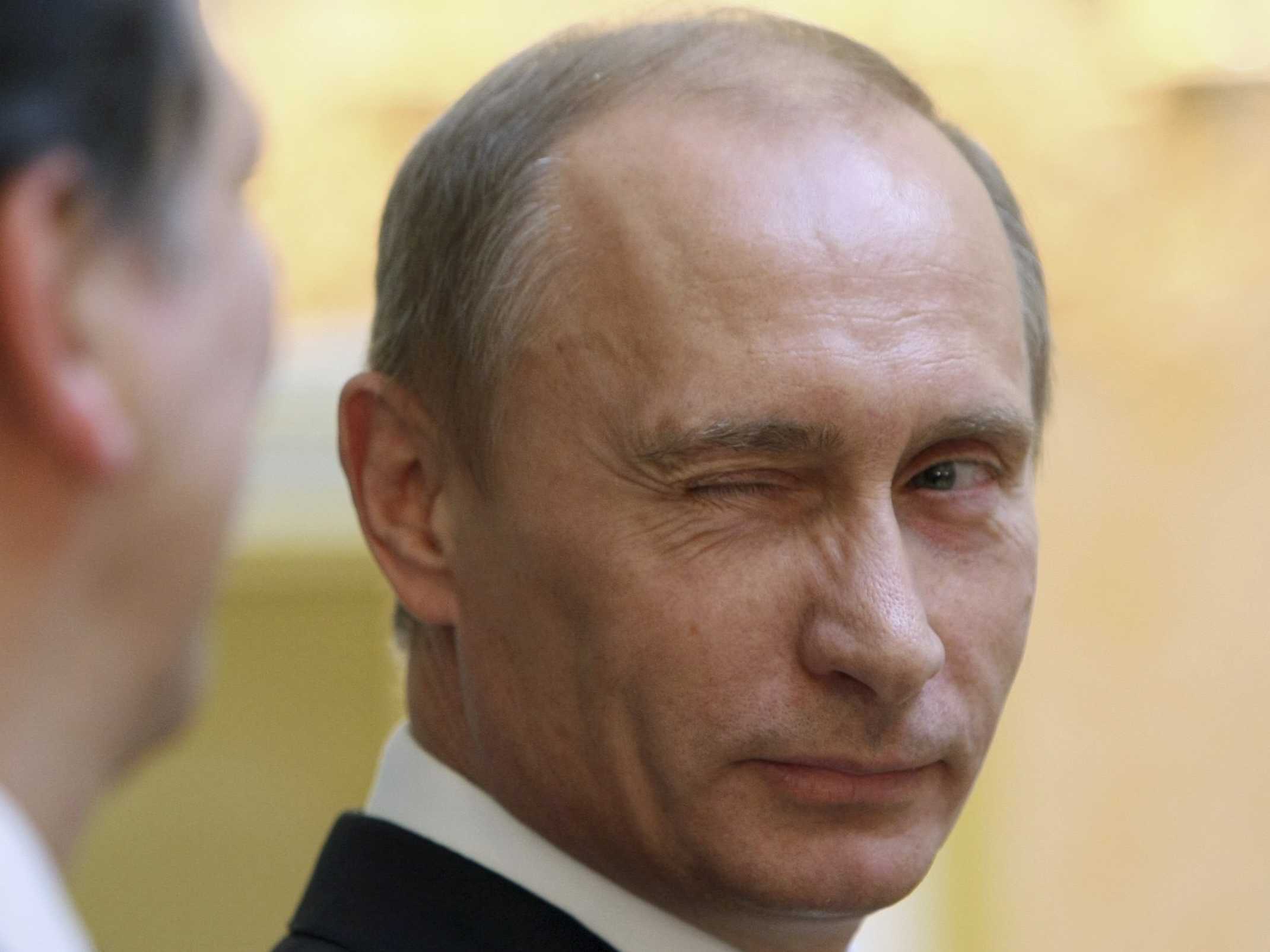 Everything You Need To Know About Vladimir Putin

“There is no such thing as a former KGB man.”

2014 seemed to be the year that Russia returned to the world stage (i.e. all over your newsfeed) after a two decade hiatus. Russia (under the leadership of President Putin) challenges the West in at least two conflicts, Syria and Ukraine, and has undertaken a “pivot to Asia” of its own, establishing closer ties (and energy contracts) with China.

Today’s Russia is shaped by both its convoluted history and its President, Vladimir Putin (a politician with 90%+ approval ratings, near total control of the press and a penchant for trying to look good in leather). Both attributes result in behavior that seems unpredictable, even self destructive when viewed from afar but, as is usually the case with such things, there is more than meets the eye.

We’ve put together this little guide to help explain the man (Putin) and the country he leads (Russia).

The Story of Putin

Vladimir Vladimirovich Putin was born in Leningrad (now St. Petersburg) in 1952, making him fortunate enough to miss out on the Stalin years. A former KGB officer with posts in East Germany, he rose to the head of the FSB (the new KGB) in 1998 and was appointed PM by Boris Yeltsin (a jolly “democrat” who was once found by Secret Service drunk, in his underwear, trying to order a pizza outside the White House).

Putin assumed the Presidency upon Yeltsin’s death in 1999. He was a virtual unknown at the time but the judo-loving, non-drinking new President stood in stark contrast to his sickly predecessor. Putin consistently plays the role of Russia’s strongman, calling the collapse of the Soviet Union “the greatest political catastrophe” of the 20th Century and going about trying to rebuild Russia’s status as a major world player.

Putin inherited a Russia in complete freefall. The country had just defaulted on its debt and requested a bailout from the US. Economic output was a shadow of pre-1990 levels and the country was ruled by a group of wealthy businessmen who we now know as “oligarchs.” These businessmen had grabbed state assets at fire sale prices in the wake of a privatization frenzy in the 90s and carved out mini-fiefdoms for themselves in Russia, accumulating assets all over the world (luxury yachts in St. Tropez, mansions in London and some European soccer clubs… cough Chelsea cough).

His first order of business was to bring these men to heel. He invited them to Stalin’s summer home and ordered them to keep their noses out of politics. Some complied, others wound up dead or in prison. Meanwhile, the economy grew, fueled by higher oil prices (pun intended).

Next, he had to deal with Chechnya, a breakaway region that had been the epicentre of a brutal war with Russia. Things got nasty after a series of “apartment bombings” in 1999 and he raised the stakes again after two deadly attacks in 2002 (Dubrovka Theatre) and 2004 (Beslan School). He eventually “pacified” the country. The two Boston Bombers of 2013 were from Chechnya.

During this period the Russia economy grew rapidly (driven by oil and gas prices) allowing Putin to make an unwritten deal with the Russian people. He would provide economic and political stability as well as restore Russia’s rightful place in the world order and in return, he would be allowed to curtail certain democratic and civil freedoms.

At this stage, he had good relationships with the West. George W. Bush reportedly saw his soul and said this was someone the US could do business with…

Everything changed in 2008 when it seemed Putin was neither the benign democrat the West hoped, nor was he going to keep his activities limited to Russia. In 2008 Putin played musical chairs with his long time confidant, loyalist and workout partner Dmitri Medvedev. The Constitution (pesky little document) barred him for running for a third consecutive term as President. So he put Medvedev as a puppet President and took on the role of PM. They then extended the Presidential term from four to six years (spoiler alert: Putin comes back).

If that moves sounds familiar it’s because it should. Erdogan is doing something similar in Turkey today.

In 2008 Putin also decided to invade Georgia (the country not the state) in order to “protect Russians” that had declared independence in the two breakaway provinces of South Ossetia and Abkhazia. He had a falling out with the Georgian President Mikhel Saakshvilli (good buddy with oligarchs who dislike Putin) and, well, it didn’t end well for good old Saak. Putin’s troops are still in Georgia and Georgia desperately wants to be part of NATO (forget it).

During this time Barack Obama announced a “reset” of US-Russian relations. (except they got the Russian wrong).

With a firm grip on domestic power, Putin returned to the Presidency (shocker) amid widespread protests. In the face of lower economic growth and declining popularity (people grow tired eventually), he started projecting Russian power in the Middle East and Eastern Europe (Ukraine), thus testing NATO.

The big test came in January 2014, when the “democratically elected” pro-Russian regime of Yanukovich was overthrown by pro-Western protesters in Ukraine. Putin ended up losing an ally and puppet. The Russia-Western relationship quickly started falling apart from there.

In many ways Russia is the big brother Ukraine never wanted. After centuries of Russia’s “embrace”, Ukraine finally gained its independence in 1991. Despite being independent, Ukraine (especially Eastern Ukraine) relied heavily on Russia’s economy and natural gas. The post-independence period was characterized by “democracy,” corruption (leading to the rise of Ukrainian oligarchs) and economic collapse.

The country oscillated between a pro-Western outlook on the world and a pro-Russian outlook, often hedging which side it chose with vague assurance to the other. Broadly speaking the Eastern side of Ukraine had a lot more affinity to Russia, with many speaking Russian as their native tongue and some being ethnically Russian. Western Ukraine had a more pro-West attitude, clamoring to join the EU and eventually NATO.

In December 2013 the situation came to a head as Yanukovych (a pro-Putin leader) had to make a decision between aligning himself with Moscow, or Brussels. He chose Moscow. The rest is, as you say, history:

Did this hurt Putin? Not in the slightest. The Russian population tightened its belt and supported its leader who was seen as restoring Russia’s place in the World and stopping the Eastern encroachment of NATO (the alliance had swallowed up the three Baltic former USSR states of Latvia, Lithuania and Estonia, all of which have sizeable Russian minorities).

With Ukraine in a deadlock (and Putin still holding onto Crimea and parts of Eastern Ukraine) Putin has been able to focus on Syria where Bashar Al-Assad, a long time Russian client (big fan of buying Russian MiGs), has been fighting an uprising turned civil war against his rule (you can read our summaries about the civil war here and about ISIS here).

Russia’s intervention in the Syrian Civil War has put it at odds with a long-time nemesis, Turkey. Russia and Turkey have a love/hate relationship since forever basically. They fought many wars against each other and were on opposing sides of the Cold War.

Most recently, though, things seemed to be looking up for the dictatorial duo. Putin and Turkish President Tayyip Erdogan both share similar “leadership qualities,” (one may or may not have a gold toilet the other enjoys weight lifting and hunting shirtless) and are both tired of the pro-Western view of the world, looking to reinstate their countries’ former glory. Energy agreements, expanded commercial ties and more tourism were all hallmarks of the Russo-Turkish honeymoon.

But, alas, all good things must come to an end. Russia’s intervention in Syria put it squarely against Turkish interests (which oppose Bashar al-Assad). The situation resulted in a rupture when Turkey shot down a Russian airplane for allegedly violating its airspace for 17 seconds.

NATO quickly came to the defence of its member state, Turkey, and said that Turkey was protecting itself. Russia, limited in its military response, decided to respond in other ways. Barring tour companies from selling packages to Turkey, imposing sanctions and cancelling the huge energy project between the two countries that was meant to bypass Ukraine.

The Russian people responded with enthusiasm again. Coming to their leader’s defence and his popularity continued to rise.

A number of character traits emerge from these interactions between Putin and the West:

None of this means that Putin and the “West” are destined to clash. For one, in the Middle East they both largely want the same thing (an end to ISIS and some degree of stability) despite disagreeing on how they will go about getting it. In Ukraine their differences are wider apart but not to the point that they should go to war with each other.

Russia’s economy tanks as oil prices stay low (pun intended) and these international disputes provide for a convenient distraction from the difficult task of reforming the domestic economy. At some point he will run out of international adventures and be more accountable for what happens at home. Russia will then become even more unpredictable, bellicose and potentially authoritarian.

Further Reading (these are really good):

”How the 1980s Explains Vladimir Putin” via the Atlantic.

“Once Upon a Time in Russia” by Ben Mezrich.

“The New Tsar: The Rise and Reign of Vladimir Putin” by Steven Lee Myers

“Fragile Empire: How Russia Fell In and Out of Love with Vladimir Putin” by Ben Judah or his piece here in the New Statesman.

“Winter is Coming” by Gary Kasparov.

“Fascism, Russia and Ukraine” by Timothy Snyder in the New York Review of Books.

“Wake up Europe!” by George Soros in the New York Review of Books.