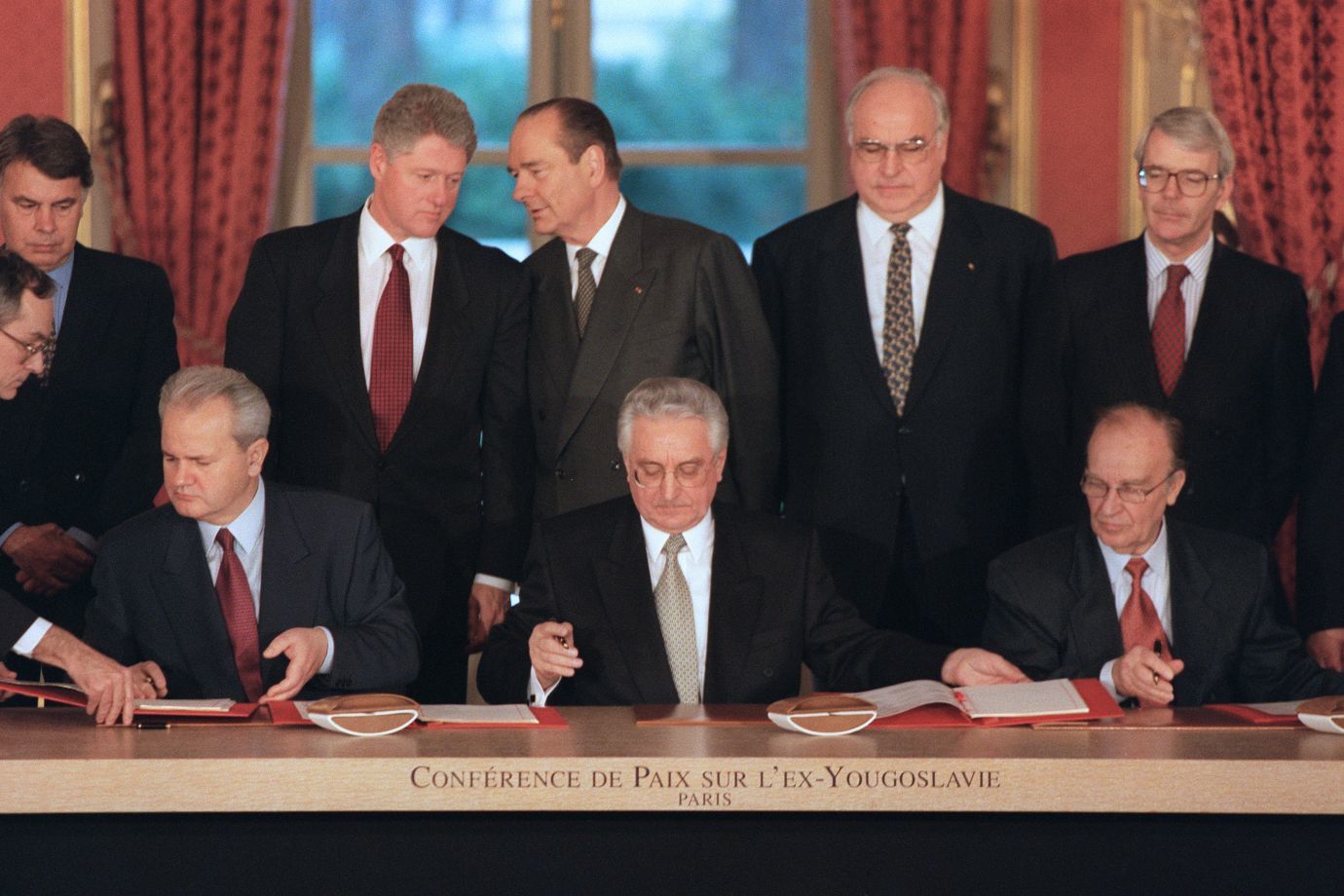 How The Bosnian War Ended

December 14, 2015 marks the 20th anniversary of the signing of the Dayton Agreement that effectively ended the three-and-a-half year-long Bosnian war, one of the many Yugoslav wars (see below) that followed the breakup of Yugoslavia.

The Dayton Agreement is viewed as one of the most effective instances in which power (a bombing campaign) and diplomacy (shuttle diplomacy at its finest and most exhausting) can be used in tandem to resolve a bloody ethnic and territorial struggle. To this day, Bosnia maintains the Dayton institutions put in place in December 1995.

To mark this occasion we sat down with Thomas Miller, President of the International Executive Service Corps and former US Ambassador to Bosnia-Herzegovina from 1999 to 2001, to discuss the implementation and legacy of the Dayton Agreement.

But before we launch into the interview we wanted to provide a simplified background on the war:

After years of fighting, the international community (particularly the United States) stepped in. The effort was pioneered by Richard Holbrooke, a veteran negotiator who knew the intricacies of the Balkans well. The US and NATO conducted an aerial bombardment of Bosnian-Serbs adding pressure on them and their patron, Slobodan Milosevic of Serbia, to come to the negotiating table.

The effort finally culminated in Dayton, Ohio, a sleepy town with an air force base and not much else to do. There the three main parties (Croatia, Bosnian-Muslims and Serbia) signed an agreement that ended the Bosnian war and remains in effect today.

As we face multiple ethnic conflicts today, the lessons of Dayton are just as relevant as ever:

MK: How crucial was the US role in achieving success in ending the conflict?

ThM: Absolutely essential. There was a need for one catalyst to bring all the players together. That catalyst had to have credibility, so it couldn’t just be anyone who was a good diplomat. It had to be someone who had a lot of oompf, strength behind them, and that catalyst had to be super smart, be thinking along several dimensions because this was a conflict that had many dimensions to it.

MK: This recipe for peace worked. Do you mind sharing the ingredients list with our readers?

ThM: Human factors are really important in terms of negotiators. Holbrooke’s style was exceedingly important, but that bullying, kind of in your face style that worked in Bosnia did not work in Afghanistan [where Holbrooke was later stationed by Hillary Clinton], and it was very frustrating for Holbrooke. Holbrooke saw the need to bring the international community into this to give them some ownership. The EU was there, the UN was involved, the Russians were there, and you couldn’t exclude a player because you ran the risk of that one tries to play a spoiler’s role.

MK: Do you believe that the Dayton Accords in fact validated results sometimes achieved on the ground through ethnic cleansing? Is it a good idea to give the impression that ethnic cleansing may have contributed in part to pave the way for peace?

ThM: Every human instinct in us says that those who perpetrated the atrocities have got to pay. Hillary Clinton said it very well, as a career diplomat, you negotiate with your enemies, not with your friends. So my answer is very simple, you have to negotiate with these people if you’re ever going to resolve this thing. The ethnic cleansing was horrendous, but you had no other way to stop it than to negotiate.

MK: The Dayton institutions (Office of the Higher Representative, Alternating presidency every eight months) are often seen as scolerotic and heavily bureaucratic; should they be reformed, or are they still filling their role in maintaining peace and preventing conflict?

ThM: There is no question they should be reformed. How you do it is the trick. A country of less than four million people that has 12 education ministers, there’s something wrong. A rotating presidency, three presidents… There is a lot of stuff that needs to be reformed. In hindsight, it would have been helpful to build in a self-correcting mechanism, like there has to be a conference every 5 to 10 years and there has to be X, Y, and Z. There were a bunch of attempts at that, to make Dayton better in terms of all the governance stuff, because it’s still dependent on the parties, and even though the names of the people have changed, the base of perspectives really haven’t changed.

MK: Why has foreign policy such as the Dayton Accords worked in the Balkans (to a certain extent) but not, for example, in the context of the Arab-Israeli war where there are also significant ethnic and religious tensions?

ThM: One of the things that was going on in Bosnia that has not really ever reached that threshold was the pain. When there is so much pain going on, your impetus to search for a solution is greater. Bosnia had the pain — 100,000 dead, the people, the country, a couple hundred thousand displaced, the rape camps. Even at the worst of the intifada, the Palestinian-Israeli thing was terrorism but it was not something that affected the general population every single day. The issue with the Arab-Israeli conflict is that the positions have hardened over the years, there’s so many years of distrust, and there’s no real pain like in Bosnia, the general population are not like in the siege of Sarajevo.

MK: Taking the concept of a multi-national/multi-ethnic state to Iraq and maybe Syria, do you believe a variant of Dayton could work there?

ThM: I think a variant could work, but you’d have to have a good deal of local autonomy. The problem with Dayton is that it gave too much local autonomy, basically created two nations. You have to have the balance between local autonomy — that should be for the stuff that affects people everyday (education, sanitation, medical…) — and the stuff that are basic functions of the nation state should be done at the central level (foreign affairs, defense, aspects of justice). Dayton attempted to strike that balance but the implementation of it didn’t do it. That’s what I would aspire to do in Iraq which is much easier than Syria (the diplomatic nightmare of all, it is the worst situation I have ever seen), because you have a Kurdish zone that is autonomous anyways and they argue over oil revenues. I think it’s hard to split Syria into zones, because there are so many different groups and pockets. You’d have to have a multi-ethnic government and structures and mechanisms that paid a lot of attention to majority rule that guaranteed minority rights.