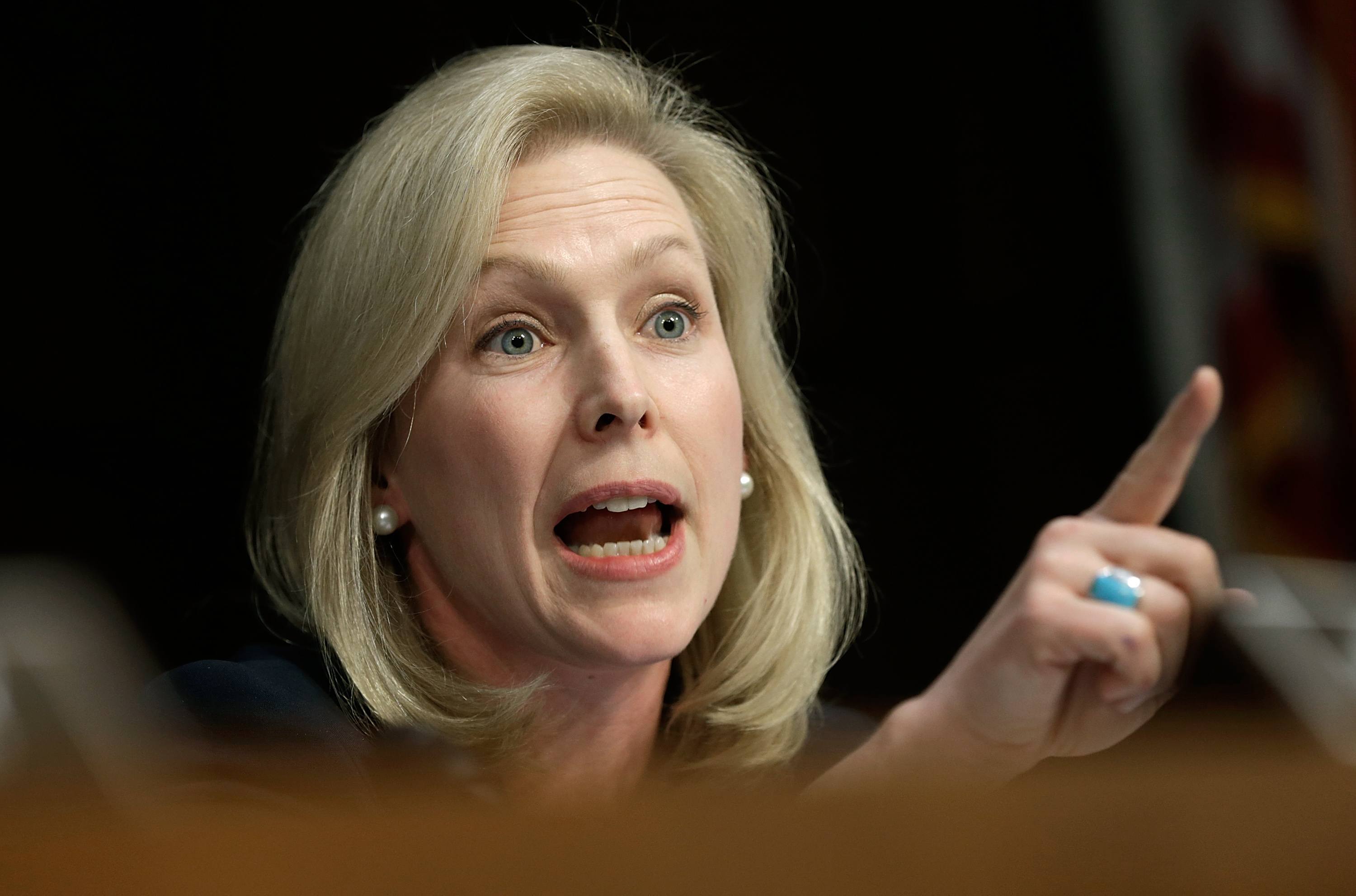 A Conversation with Senator Kirsten Gillibrand

We ask the senator from New York about Iran, the election, and work-life balance.

How can we use the Iran Deal to address the myriad challenges we face in the region?

The purpose of the deal was to assure that Iran would not be able to develop a nuclear weapon which would not only be a game-changer in the region, but would also be an existential threat to our allies in the region. The purpose of the agreement, and what the agreement provided for, was a roadmap to actually cease production of nuclear materials for any military purposes in the future. It shuts down all pathways to a bomb, and it creates a significant military and intelligence edge for the United States.

The three known facilities will be regularly monitored. The one that was a heavy water plutonium facility in Iraq will be filled with concrete, which is significant because it will no longer be used for production. The facility located deep in the ground will no longer do production – it will be used for research. And we’ll now have inspectors at the supply chains. So you’ll have mines, mills, centrifuges and gasification production. Having that level of intelligence will be valuable in detecting whether or not they breach the agreement. If they breach the agreement, we have a snapback provision that allows us to renew all sanctions – not just US sanctions, but Russia’s and China’s and the EU’s. I think the agreement creates a real opportunity to have transparency that could never have been possible outside this agreement.

What do you think it means for Israel?

Israel’s concern has always been that they didn’t want the nuclear threat of Iran having a nuclear weapon, and that has been addressed. But their secondary concern is equally as troubling and problematic and that is the threat of terrorism. They worried that without the sanctions more money will flow into terrorism. Whether we signed onto the agreement or not will not change that, because about $50 billion will flow into Iran regardless of whether we endorse and sign this agreement. The other countries are not going to continue the sanctions, and they have been very plain about that.

The reality, however, is that terrorism is not very expensive. And that was one of the things that the Secretary of Defense said in one of the Armed Services hearings that I went to. They’ve successfully sent $200 million on terrorism under the tightest sanction regime imaginable, crippling sanctions. And they’ve still managed to fund money to terrorism. So regardless of whether they get $50 billion, they will continue to fund terrorism as they always have. What the United States has done to try to address that concern – which is a very legitimate concern – is promise Israel more support for defense and more support for anti-terrorism missions. We’ve also promised our allies in the Middle East more support for anti-terrorism missions.

We’re seeing the rise of the anti-establishment candidates. Why do you think that is, and what effect do you think it will have on Washington beyond just the campaign trail?

I think a lot of voters, particularly in New York, which is the state I know best, have a general feeling of uncertainty about the economy. There’s general disillusionment with Washington that Washington’s broken, that politicians aren’t trustworthy. So I think a lot of voters are just concerned that their lives aren’t getting better, that their children aren’t going to have a better life than themselves. That really drives people toward an interest in change. So there’s a real interest in non-status quo candidates – candidates who are offering significant differences.

That’s why I think Trump has surged in the first few months of the campaign on the Republican side, because he’s arguably an outsider. He’s someone who’s successful in business, someone who’s not been elected before. So among all the Republicans he’s doing better than a status quo candidate like Jeb Bush, for example. I think Bernie is getting the advantage of that right now, because he’s new. His message is of change, of flipping issues like income inequality, really fighting for the middle class, changing minimum wage. A lot of the issues he’s talking about are very much the same issues Hillary’s talking about. He’s just a new messenger, and that’s inspiring some people. But I think the election right now is about someone who’s going to look out for regular people who are struggling right now. And so they’re looking for a change, they’re looking for someone new.

As a US senator, as a mother and a wife, how do you achieve work-life balance?

You really have to build the life you want as a public servant. And for every mother who works – most mothers do work – so for all working parents, you have to find a balance between doing your jobs well, while also providing for your children. And so I do that just like everybody else does it. I have enormous advantages that most people don’t have. I run my own office, so if I don’t want to take a meeting before 9 o’clock because I want to bring my children to school, I can actually do that. If I don’t want to take meetings between 5 and 7pm, so I can pick them up from school, make them dinner and get them ready for bed, I can typically do that. The only thing I don’t have a control over is when the votes are. But in the rest of my life I have enormous control, and most low-wage workers have no control….

Who are your role models?

In my own family, I had great role models in my mother and my grandmother. My grandmother was my political role model. She got involved in politics when she was 18 years old. She was a secretary in our state legislature. She never went to college, but she recognized at a young age that all the legislators were men and all the secretaries were women. And if she wanted to have a voice or a say in anything, she could do better with organizing – if she could get all the women in the legislature to care about politics and who was getting elected, she could have a greater impact than just herself. So she formed the Women’s Democratic Club in upstate New York, and they organized women for two generations. Over time they became powerful, because you couldn’t get elected if you didn’t have the blessing of my grandmother and her lady friends. They did all the work on the campaigns, all the door-to-door, everything. She really inspired me as a young girl, because she’d take me with her to work on campaigns… and what I loved most about it was how empowered these women were. Rooms full of women who were working for candidates who shared their values, who cared about things they cared about. They were having fun, they were loving it.… It’s one of the reasons why when I was a very young girl I said I wanted to be a senator. I did not know what a senator was. I’m sure I was referring to a state senator. I just thought it was somebody who was important, who’d get to make decisions and was part of politics. I didn’t admit that again until almost 30 years later, but it was something that I believed in then that was really formed from her.

My mother was a role model, because she went to law school. She was only one of three women in her law school class. It was very unusual for women to have careers then. Among my girlfriends’ moms, she was one of the few…. She did things differently. By the time she was my age, she was a second-degree black belt, and she’d come home from the karate dojo with bruises down her arms. I’d think, “Mommy, how about tennis? Why do you need to do karate?” It distressed me so much, but she loved it…. She was a role model for me, because she dared to be different. She didn’t follow the patterns of other women. She didn’t do what she was supposed to do. She did what she wanted to do. She always wanted to have a career. She always balanced her family and career seamlessly. I remember times when she’d be on the telephone, filing some details of an adoption case while she was cooking dinner, while she was asking me “How was your day, honey?” She was just one of the original multi-taskers. She loved doing both. So I never imagined I wouldn’t work and have a career. I never imagined I would want anything different.

What’s it like being a woman in the Senate? Is it harder to get things done? Is there sexism?

It’s definitely not harder to get things done. It’s the same landscape as any industry. I get under-estimated all the time. Many of the other senators are very kindly toward me, even paternalistic. But that is no different than being in the law, being in medicine. So it’s the landscape on which we play. It’s the field on which all industries are on. Despite that, what I’ve learned from it is that you need to know what the rules of the game are, what the landscape’s like, and then you need to do your best within those confines. So, yes, some of my colleagues are very sweet and kindly toward me and treat me more like their granddaughter. It doesn’t matter. It doesn’t mean we can’t find common ground. It doesn’t mean we can’t come together and do really important legislation on important issues. I think the Senate is no different than any other place. It’s very similar to law firm life and my other careers before I became a politician.

How do you work around those obstacles?

You just work with reality. And you work with people regardless of what their perspective is. So if they like me because I remind them of their granddaughter, that’s okay. They are who they are. So you work with who your colleagues are, and you have to recognize that regardless of what they think of you – and whether they appreciate you or not – there’s something you share in common. You just have to find what that is….

What advice would you give to someone just starting his or her career?

My number one advice would be to find your passion and pursue your passion and to recognize that what you think needs change is unique to you and important. Particularly in politics – never assume someone else is doing it. Never assume somebody else is taking care of it, because they probably won’t. So if you see something that’s important that you want to build or fix or change, that’s where you should focus your interest, because passion is everything in life. It’s everything in your ability to be a strong advocate. It’s everything in your ability to change how things are done…. For women in particular, that passion is very powerful and they should recognize it and realize it’s important.

*These are the opinions of the interviewee and not those of the Pnut editorial team.